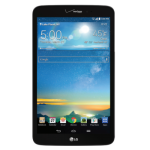 Last month the LG G Pad 8.3 LTE on Verizon got an over-the-air update, but it wasn’t the one you care about. That minor firmware bump provided LTE connectivity enhancements when moving between covered and non-covered areas. Exciting stuff.

Now another update is rolling out, and yes, this time it’s the one you want. We’re talking Android 5.0.2. We’re talking Lollipop. We’re talking material design. And, of course, we’re talking LG specific changes, such as the default placement of the recents button between the home and menu buttons.

LG G Pad 8.3 LTE On Verizon Gets Android 5.0 OTA Update was written by the awesome team at Android Police.