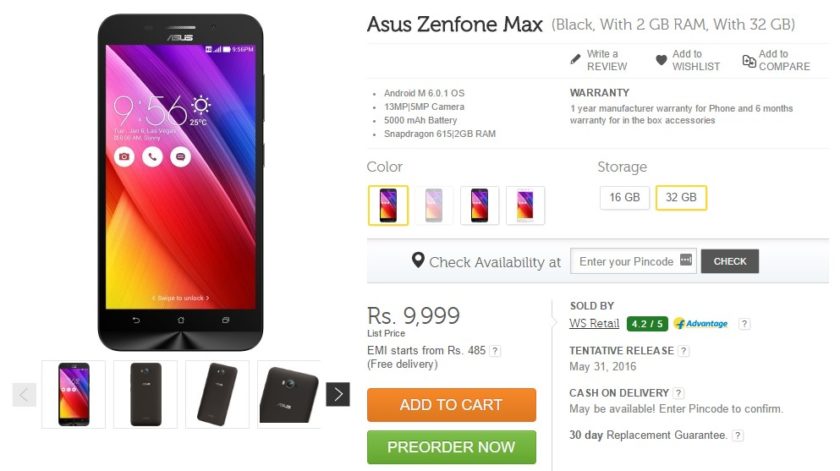 Five months after the release of the original version in India, a new and improved variant of the ZenFone Max has arrived to the market.

The new ZenFone Max addresses the biggest issue with the original version, which was first launched last August: its performance. While the first generation packed an underwhelming Snapdragon 410 processor, the new ZenFone Max gets a nice upgrade to a Snapdragon 615 processor clocked at 1.5GHz. There’s 32GB of expandable storage space, and an option of either 2GB or 3GB of RAM (compared to 16GB of storage and 2GB of RAM on the original).

Other specifications remain unchanged, including the massive 5,000 mAh battery that gives this beast its name. The battery should be good in theory for over 900 hours of stand-by time and 38 hours of talk time.

Unlike the original ZenFone Max, which launched – and remains to this day stuck – with Lollipop, the new ZenFone Max runs Marshmallow out of the box.

You can buy the new ZenFone Max (2GB of RAM) via Flipkart for Rs. 9,999, while the 3GB version is listed as coming soon for Rs. 12,999. The older version is still available for R. 8,999, a Rs. 1,000 discount over its launch price. That said, we’d recommend investing a little more and getting the updated version, which is better equipped to handle modern apps.

With the release of the new ZenFone Max, Indian customers have their choice from a range of devices with massive batteries. The Gionee Marathon M5 and M5 Plus offer 6,020 mAh and 5,020 mAh, respectively, while the Mi Max is bound to arrive to India with a 4,850-mAh unit.

Thoughts on this device?